In April 2009, Pupperoos participated in a 2 week animation film project at the Royal College of Art, London. The short film is called “Den mörka ” (“Dark Island”) and is about a young boy, Ludvig, who is forced to grow up when confronted with the bleak realities of his adolescence. It was directed by Jöns Mellgren, who also created all the tiny paper puppets.  The finished film was recently screened at the Stockholm International Film Festival and won the “1km Honorable Film Mention” for Mellgren’s “spellbinding narrative, visual flair and ability to bring a rich and darkly intriguing world to life from a single island of cardboard“. For more information about the Stockholm International Film Festival, click here To see photos from the project, click on the album below: 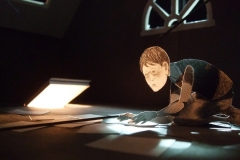