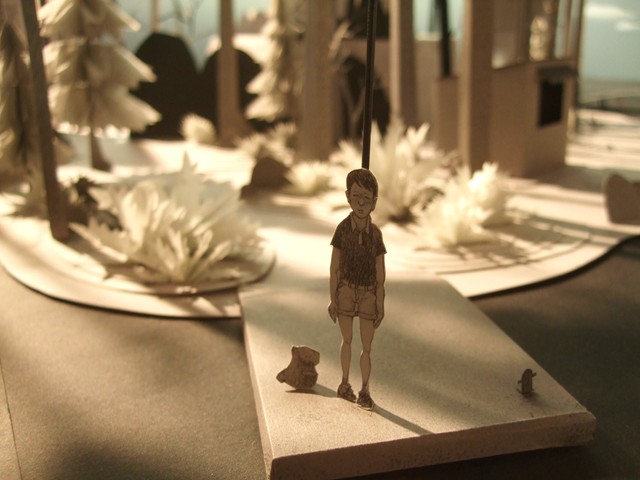 In April 2009, Pupperoos participated in a 2 week animation film project at the Royal College of Art, London. The short film is called “Dark Island” and is about a young boy, Ludvig, who is forced to grow up when confronted with the bleak realities of his adolescence. It was directed by Jöns Mellgren, who also created all the tiny paper puppets.  The finished film is to be screened at the Royal College of Art later this year.

Click on the gallery below to view more photos from the project.

Presenting our latest puppet commission: EGGbert! This adorable flying egg was made for the children's music group The Beanies. You can see him in ‘The Beanies Egg-straordinary Day’ Musical, which will be showing at The Q in Canberra, 12-15 March 2020 (theq.net.au/whats-on/productions/the-beanies-egg-straordinary-day/)

Please note that the Auburn Lunar New Year festival has been CANCELLED for this Saturday, due to health concerns. They are planning to run it on a future date (which will hopefully still include our shadow puppet shows). ... See MoreSee Less

Looking forward to the Randwick Puppet Festival this weekend! Thank you to the Southern Courier for featuring us in their article 😊 We’ll be performing ‘Puppet Pandemonium’ on Sunday 19th Jan at 11am, and running a monster peek-a-boo puppet workshop from 12.30-2pm (this is a drop-in workshop). Join us at the Randwick Community Centre (27 Munda Street, Randwick) - although it’s booked out online we’ll try and squeeze people in! And bring along a picnic to enjoy the Puppet Picnic too, happening from 10am-3pm 😊 All the events on Sunday are free btw!

Pupperoo’s Kay Yasugi is helping to put a spotlight on Randwick’s rich history of puppetry performance at the first Randwick Puppet Festival this week.
View on Facebook
·Share

We’ll be running workshops and performing at this puppet festival next week in Sydney! The Randwick Puppet Festival is on 17-19th Jan. Check out our FREE interactive puppetry variety show ‘Puppet Pandemonium’ and ‘Monster Peek-a-boo’ Puppet workshops at the Randwick Community Centre on Sunday 19th Jan 😄 ... See MoreSee Less

For anyone coming to see ‘Puppet Pandemonium’ tomorrow at ImaginArta - the Australian Puppet Centre Inc at 11am, a reminder that it’ll be daylight savings! Remember to put your clocks forward an hour, lest you miss out on meeting a singing caterpillar, 3 little pigs and cheeky monkey! 🐛🐷🐷🐷🐵
Tickets at www.imaginarta.com.au or just drop in 😊 ... See MoreSee Less

Z for Giraffe - In the Age of Enlightenment, nearly 200 years ago, a young giraffe was captured in Africa. She was sent as a gift from the Pasha of Egypt to the king of France.This is the story of her journey from North Africa to Paris by river, sea and land. She created quite a stir. The people of....
View on Facebook
·Share